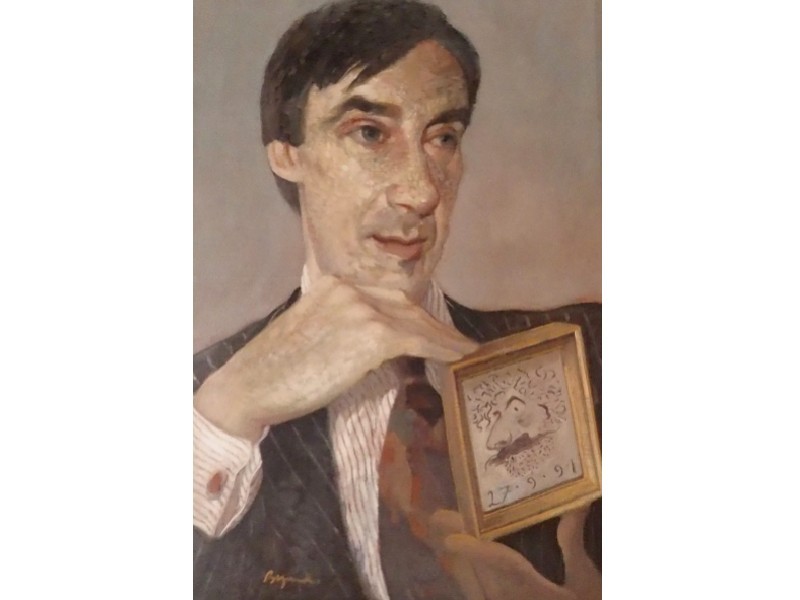 The Great Western Auctions Ltd is delighted to announce that our Autumn programme will include the sale of effects from the estate of the late William Hardie (1941-2021).

The sale will take place on Saturday 28th August at 10am.

William Hardie, curator, gallerist and writer was an important and influential figure in Scotland’s cultural history. The William Hardie Sale will include pictures, sculpture, art books, decorative objects and Arts and Crafts furniture.

William Hardie was born with an eye for art and an ear for languages. By 18 he had already translated a book on German Expressionism. After two years on the continent, he was a competent French and German speaker. He studied their respective literatures at the University of Glasgow, along with art courses by Hamish Miles, who suggested meeting Professor Young of the Fine Art Department. Being a Whistler expert, Andrew McLaren Young had just returned from curating the artist’s major retrospective at the Freer Gallery in Washington. Impressed by Bill’s achievements (it was the era of first names), Andrew offered Bill the task of transcribing Whistler’s voluminous correspondence. This was when I first met Bill, he was envious of me working with Andrew on researching my film about Mackintosh, where, he said, all the action was.

The sixties were an optimistic time in the arts. Bill Buchanan, the Scottish Arts Council’s director of art, commissioned Andrew’s trailblazing Charles Rennie Mackintosh centenary exhibition, along with my film for the 1968 Edinburgh Festival. At heart he was a gallery-man and encouraged Bill in that direction. Thanks to Andrew’s glowing reference he became the first-ever Keeper of Art with Dundee Corporation, such was the style of this remarkable professor in encouraging promising young scholars. Although Dundee’s collection of pictures was impressive, their labels dated back to 1926, so Bill set about rewriting them. At the same time, he began to update the catalogue (a ten-year task) which was published in 1976, perfectly timed to celebrate the centenary of the Gallery.

Dr. Tom Honeyman, the former art dealer who transformed Kelvingrove and greatly extended its collection of French Impressionists (often at what would now be seen as bargain prices), saw Bill as a new force in Scottish art. He was searching for a fresh outlook on the Three Scottish Colourists – Cadell, Hunter and Peploe. By adding the older Fergusson to the group, Bill renamed them as the Four Scottish Colourists, which pleased both Honeyman and Meg Morris, the artist’s widow. Perhaps Tom saw him as the tyro he himself had been at Kelvingrove 50 years before and encouraged Bill to promote artists who had made their careers beyond Scotland, like the then less known Sir William Orchardson. Backed by the Scottish Arts Council, he curated a most ambitious exhibition – at great expense – on the influential Victorian painter in The Royal Scottish Academy Diploma Gallery.  Orchardson’s large canvasses were brought in from as far as Australia and New York and included the massive Napoleon on Board the Bellerophon from the National Maritime Museum.

Bill’s most important discovery was in finding that Stanley Cursiter, an artist known for his Orkney landscapes and portraits of notable Scots, had enjoyed a brief flirtation with Futurissimo, the dynamic Italian Style derived from Cubism by Gino Severini. With Cursiter’s blessing, he offered the Tate the most impressive of three of these pictures, The Sensation of Crossing the Street – the West End of Edinburgh, but neither it nor the National Gallery of Scotland expressed any interest. So, with a generous dispensation from the artist, Bill bought it for his own teaching collection. He then enjoyed the satisfaction that it was invited to be a part of the opening show of Futurissmo e Futuristi at the restored Palazzo Grazi, situated on the Grand Canal. Cursiter’s picture caused its own sensation when Bill’s publishers chose to place the work on the front cover of his book, Scottish Painting 1837 – 1939.

Clearly Bill was now ahead of the curve and was soon invited to join the board of Christie’s. Between 1977 and 1984, he set up its Scottish Picture Department. At the same time, he was given a thorough training in all the skills of auctioneering, although for him waving the gavel was not one of them. Fortunately, his colleague Paul Howard was a most adept auctioneer and when Bill left Christie’s to form William Hardie Fine Art (Gallery) in Glasgow, Paul left shortly after and added greatly to the gallery’s success with a series of auctions.  With perfect timing, Richard Demarco, the other great promoter of the arts in Scotland, offered Bill gallery space during the Festival at the Edinburgh College of Art.  Knowing that Cursiter’s cousin had a large collection of his Orkney pictures in Tasmania, he flew with many stopovers to Hobart, only to find that they had been appraised by Sotheby’s. But his knowledge, persistence and commitment to Scottish art persuaded the family to sell their entire collection of 22 pictures, which would play a key part in the Stanley Cursiter centenary exhibition at the Edinburgh Festival.

The Gallery’s Festival exhibitions continued the following year with Alexander Graham Munro’s Moroccan Pastels when over 130 pictures were sold.  Francis McCracken, a New Zealand artist who settled in Scotland in the 1920s, was another commercial success in 1986, with all the remaining pictures being bought by a dealer in Auckland.

Up until 2000 when the lease of his Gallery ran out, Bill and his assistant, the artist Fiona Robertson, mounted exhibition after exhibition from home and abroad. When Bill brought David Hockney and his latest pictures over from California, the exhibition attracted 10,0000 visitors that neither the National Gallery of Scotland nor Kelvingrove ever achieved. He won over Hockney with several trips to his studio. Perhaps the clincher was experiencing the artist’s ‘Wagner Drive’ from Malibu, drifting around the many bends of Mulholland Drive in a thunderstorm over the Hollywood Hills, with Hockney driving while balancing his dachshund on his lap with Parsifal playing full blast to the beat of the windscreen wipers in the rain.

The Japanese influence on Mackintosh’s design combined with his sense of space lured Hardie to Japan many times. He learnt Japanese, enthralling collectors there, no one more so than Tetsuya Mukai of the Haida-Takayama Museum in the foothills of the Japanese Alps, which now has Hardie’s fine Mackintosh collection. As a long-standing governor of the Glasgow School of Art, his friendship secured the Tetsuya Maika Student Scholarship. On his last foray to Japan in 2007, visiting his generous friend again, he suffered a near fatal stroke and was rushed to the Morioka hospital.

When I last met Bill two years ago at Rogano’s, his rush of ideas was still intact, though delivered in staccato bursts. His courage and the patience of his editors at Waverley Books converged to deliver Gallery: A Life in Art, one of the best autobiographies of the British contemporary art world. Bill proved that a commercial gallery in Glasgow could be a major player on the world stage, as well as a stalwart promoter of Scottish art. In one stroke, he answered the slurs of those Thames Valley Provincials whose line was: “Scottish painting – does it exist?”

circa 1903, the green/blue enamel dial with a copper chapter ring, Roman numerals, with Lenskirch movement, marked 575624, the back door with holder for key, marked 0150 to base, 32cm high

A LIBERTYS OF LONDON OAK ARTS AND CRAFTS SIDEBOARD

the overhanging cornice above a leaded glass door, flanked by open shelves, the base with a drawer and two doors, applied with hammered oxidised metal mounts, 187cm high, 190cm wide and 61cm deep 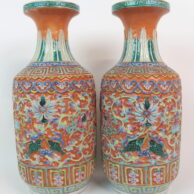 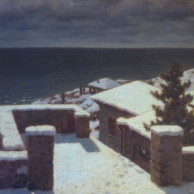 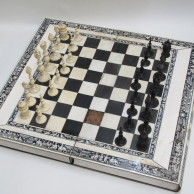 An Anglo-Indian ivory games board 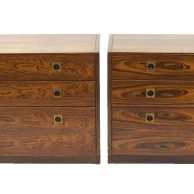 A pair of rosewood chests designed by Robert Herit... 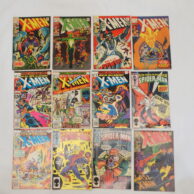 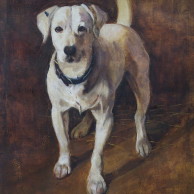 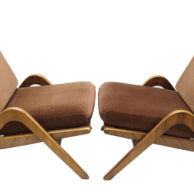 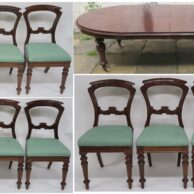 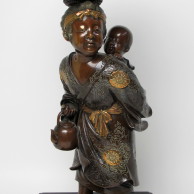 A Japanese bronze figure of a mother carrying her ... 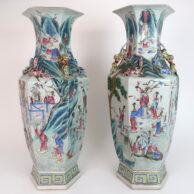 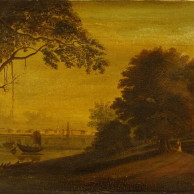 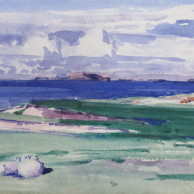 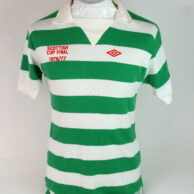 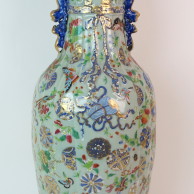 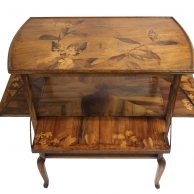 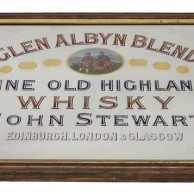 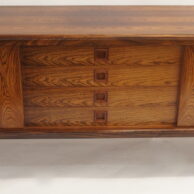 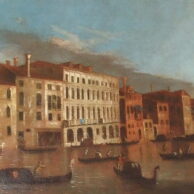 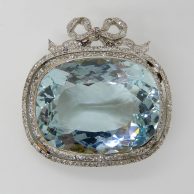 A SUBSTANTIAL AQUAMARINE AND DIAMOND BROOCH