The Story of the John William Waterhouse Sketch

Delving deeper into a rare piece by the renowned Pre-Raphaelite painter. 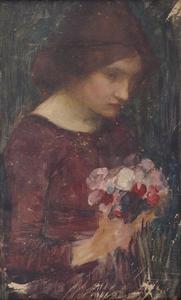 Destined for the bonfire and riddled with woodworm, this unsigned oil sketch by John William Waterhouse achieved £54,096 including buyer’s premium at our Autumn Fine Art & Antiques Auction on the 19th of September 2020.

This hidden treasure was uncovered in a dusty attic by the erudite eye of senior auctioneer & valuer Paul Howard during a house visit in Argyll. Subject to decades of neglect and covered in layers of dirt and grime, the work was in dreadful condition. Despite this, a flurry of fierce, global competitive bidding both from telephones and online confirmed the auction attribution and ensured a tremendous result for this Pre-Raphaelite painting.

Anita Manning said: “This wonderful work will be brought back to its former glory by restoration, and I am delighted that the Great Western Auctions marked the beginning of its journey.”

Founded in the Autumn of 1848 by the trifecta of John Everett Millais (1829-96), William Holman Hunt (1827-1910) and Dante Gabriel Rossetti (1828-82) as a reaction to the rather lax, drab and dark style of traditional academic painting championed by the Academy Schools and its first president Sir Joshua Reynolds, a style which followed the Florentine Renaissance master Raphael (considered the supreme artist in 19th century England), the impetus of this motley crew was to challenge this rigid system from within, and to accurately portray nature in all its glory. Frustrated with the utilitarian ethos of mid-century Victorian England, the Brotherhood’s dedicated atavism infused their works with influences from old masters such as Van Eyck, Mantegna and Giotto, creating supremely detailed paintings composed in a glimmering array of effulgent colour, which featured a vast range of characters taken from both literature and legend.

The year 1853 marks the end of the official Pre-Raphaelite Brotherhood and the beginning of a second wave. Whereas no member of the Brotherhood could be considered a leader in the formative years, the second wave of Pre-Raphaelitism was largely dominated by Rossetti and his compatriot, Edward Burne-Jones. The medievalism of the second wave of Pre-Raphaelitism – which elsewhere in Victorian literature, took on burdensome political and religious connotations – is often characterised as a dreamy escape to bucolic fantasy worlds, often featuring heroes and heroines from Arthurian Legend. The aestheticism of Rossetti and Burne-Jones during this period saw the creation of many works featuring ‘stunners’; beautiful, red-haired models such as Fanny Cornforth, Alexa Wilding and Elizabeth Siddal cast as Greek goddesses, Shakespearean femme fatales, or as ‘fallen women’.

As a relative latecomer to Pre-Raphaelitism, John William Waterhouse (1849-1917) first embraced the movement several decades after the original Brotherhood disbanded, harmoniously melding the group’s now ubiquitous aesthetic with his own personal interest in classical themes.

Training at the prestigious Royal Academy Schools first as a sculptor, Waterhouse’s early inspirations of fellow classical artists Lawrence Alma-Tadema and Sir Frederic Leighton were soon fused with the later Pre-Raphaelitism of Rossetti and Burne-Jones, resulting in a distinctly original praxis. His style was soon critically acclaimed, and he was soon elected as an Associate of the Royal Academy.

While Waterhouse occupies a realm that overlaps with the Neo-classical painters and the Pre-Raphaelites, the theme he is undoubtedly most known and celebrated for is the femme fatale, as his oeuvre is populated with beautiful women in the role of enchantresses draped in sumptuous fabrics, which is perhaps best exemplified by his most famous painting, The Lady of Shalott (1888). Though the work sold at Great Western Auctions was a small oil sketch, the figure of the young girl clutching a bouquet of flowers strongly evokes the ethereal beauty synonymous with Waterhouse, who succeeded in evoking this trait with a supreme economy of means.