Pocket Money Purchases from the Past: Fierce Bidding for Comic Collection 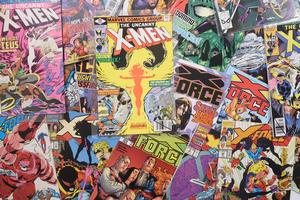 Our 21st-22nd September Antiques & Collectables Auction caused a storm amongst avid comic collectors: more than 3,000 comics, annuals and graphic novels spanning over 20 lots were up for grabs, and many caught the eyes of competitive bidders.

The lots, which comprised two private collections dating back to the 1970’s, contained a huge variety of heroes and villains. Lot 481 contained many iconic Uncanny X-men issues, including the infamous Dark Phoenix saga, Gambit, Emma Frost and Dazzler’s first official appearances, as well as a large quantity of unbroken runs. The lot achieved £644*.

Containing Amazing Spider-man issues from 76 to 441, lot 482 including sought-after issues 300, 344 and 361, the first appearances of Spider-man’s rivals and main antagonists, Venom and Carnage, fans fiercely fought for the lot, which achieved £1,030*.

Batman proved to be the top-performing character of the day. Lot 496, an extensive collection of DC Batman Comics spanning Issues 282 to 796, including the first appearance of Bat Girl Barbara Gordon, first Silver age appearances of Penguin, Scarecrow and Bag O’ Bones, notable covers such as issue 214, Women’s Liberation cover, and the iconic Todd McFarlane cover, issue 423, the lot soared to £2,318*.

If you have comics or related memorabilia that you would like to sell, Great Western Auctions would be delighted to help you. Early issues are highly prized among collectors, though many newer iterations with special covers or origin stories of heroes command strong prices.

Your collection will be thoroughly and accurately catalogued and organised into lots that would appeal to a wide variety of buyers. If you would like any further information, please email ruairi.barfoot@greatwesternauctions.com.